The Swan is a community pub on Thornbury high street. We have an array of activities going on throughout the week and live music on the weekend. There is a large patio garden to the rear of the pub and we have 3 bed and breakfast rooms which overlook the high street. Great home cooked food is available 7 days a week. There is also a well appointed function room which can be used for business meetings and parties alike.

The Swan is steeped with character and old fashioned charm and was the first original coach house in Thornbury. In fact, there is only 1 other building that was built prior to The Swan, which is Thornbury Castle. The back wall dates back to 1659 and most of the building is grade listed 1 and 2.

Read more about the history of The Swan on the local history website Thornbury Roots.

Dogs welcome inside
Water bowl provided
We have a pub dog!
Dogs allowed in bedrooms

Large room with bar available for weddings, functions or corporate use.

Get online here easily and free!

Come and cosy up to our huge open fires on cold days and nights.

“We have raised a whopping total of over £100,000 for various local charities through our fundraising events, and it’s our goal to continue helping the community of Thornbury. “

The Swan has been awarded the Regional Community Pub of the year for Bristol / surrounding area and South West Wales – it have won £5,000 to put towards a Community Based charity. During 2014, The Swan won the Gold Award in the Thornbury In Bloom for the array of colour and its arrangements of flowers. This was recently acknowledged again and in 2016 it won Thornbury In Bloom, the Chairman’s 25th anniversary award for the community work they have done and are still doing, as well as the Gold Award for our gardens.

The Swan also won a silver award in March 2015 for its Fairtrade hot drinks and being an active supporter of Fairtrade. Most recently, we have added to these awards by winning the 2017 Fairtrade Coffee Silver Award and been accredited the Guinness of quality accreditation. 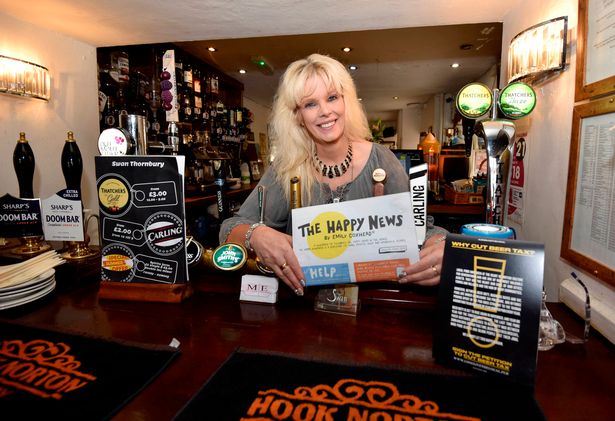 Sandra took over the pub in 2011 and restored The Swan to its hostoric former glory.

She has tirelessly raised money for charity in Thornbury and made The Swan a community hub for the town.